Read about our latest projects 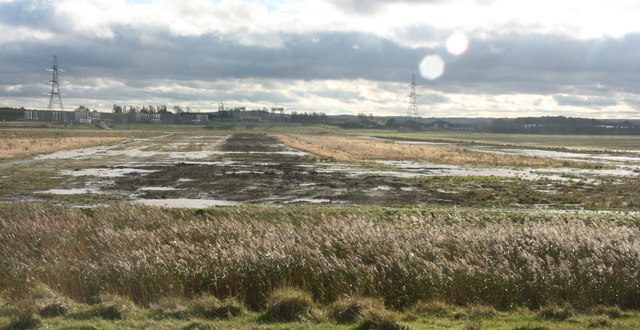 As I write the country is hit by icy temperatures. Not quite down to the -40 degrees I experienced while working in the Arctic in 2013 but still enough to send us all scurrying to turn the heating on.

This surge in energy usage is threatening the countries supply of gas and will possibly lead to cries to allow increased fracking with all its attendant potential to damage our water supplies.

Alternative energy sources are, of course, part of the solution but like all developments they need to be appropriately sited.

At Langenhoe in Essex, the solar farm is situated on flat fields near the River Colne and Mersea Island. Each month I visit the site and conduct wetland bird surveys (Webs counts) on behalf of Brooks Ecological Services. The survey area is unexceptional and it is not possible for me to judge whether it was more valuable for wildlife before the solar farm was developed. Certainly the arable fields surrounding the site support huge flocks of wintering lapwing and golden plover and lots more could be done to improve the survey area for the benefit of these birds but, in this instance, my job is simply to record what is now there.

No one doubts that solar energy plays a vital role in the fight against climate change. Equally no one can really argue that solar farms are ugly intrusions on the landscape. However, until now, the majority of solar farm developments have not attracted too much controversy.

Unfortunately that has now changed. In 2015 the Government withdrew it’s support for green energy and cut subsidies for solar farm developers. This meant that small solar farms were no longer financially viable and developers have reacted by putting in planning applications for mega farms.

Developers Hive Energy and Wirsol Energy are now proposing covering 900 acres of Graveney Marshes outside Faversham in Kent with panels which would make it the biggest development in the country and five times bigger than any other solar farm to date. The land, currently used by grazing wildfowl, is adjacent to Kent Wildlife Trust’s South Swale Reserve and the Trust fear that it would cause habitats to become fragmented, marooning wildlife in pockets of pristine habitat from which they couldn’t expand. There are also fears of the direct impact on wildlife from the change of land use. The fields are currently used by brent geese and widgeon in winter and skylarks and meadow pipits in summer, all birds of conservation concern which would lose out if these proposals were to go ahead.

It seems bizarre, at this time of unpredictable weather patterns caused by climate change and mass housing development, that the Government is not creating legislation to force housing developers to install solar panels on new build roofs and insist supermarkets install them on warehouses, thereby making us all much more self sufficient in energy while at the same time make it easier for us to reduce our energy consumption by helping people properly insulate their houses. Away from working on solar farms I revisited Wademarsh channel on Chislet marshes where volunteers from the Kentish Stour Countryside Partnership had spent the autumn clearing around 500m of channel infested with parrot’s feather.

It was heartening to see the positive impact of their work with only small amounts of the plant remaining. The work is only just beginning though as most of the 6km channel is still infested. Monitoring will now take place throughout the summer and the volunteers will continue their good work this autumn.

Lastly, work has begun again with farmers in North Kent as part of the Breeding Wader project. After the winter rains lots of the land is holding water better than in previous years and improvements to rills and scrapes carried out using money from the North Kent Capital Grant Scheme has created bare earth ideal for lapwings.

Just before the snow hit I witnessed my first pair of lapwing displaying on the wind blasted shores of the Thames. Let’s hope the current icy blast doesn’t effect our wildlife too badly and there will be plenty of birds to breed this spring.

I for one am keeping bird feeders topped up and the bird bath unfrozen.